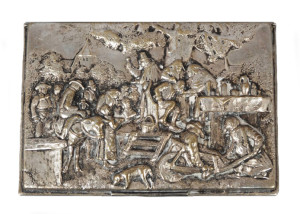 Today marks the beginning of the first day of the Bacchanalia, the ancient Roman festivals celebrating the god Bacchus. Bacchus (the Roman version of the Greek god Dionysus) was the god of wine and the grape harvest, winemaking and intoxication, fertility and epiphany. The Bacchanalia festivals take place in early Spring, and possibly began as fertility rites. The celebrations also included processions and dramatic performances as well as religious rites, but the “drinking feasts” are perhaps the most well-known aspect of the Bacchanalia today. The term bacchanalia or bacchanal has come to describe any type of uninhibited (and often drunken) revelry.

The flowering of the Renaissance spurred developments in all areas of society, but it is perhaps best known for its remarkable innovations in visual art. The Middle Ages had not approved of the licentious traits associated with Bacchus/Dionysus, to say the least. Renaissance artists embraced the theme of the Bacchanalia, restoring the god of wine as an appropriate subject by associating Bacchus’ life-birth-rebirth cycle with the Christian resurrection. The bacchanal in art also allowed artists to freely depict reveling nude figures under the respectable aegis of “mythology”, and it remained a popular theme in art long after its association with Christian resurrection faded away. 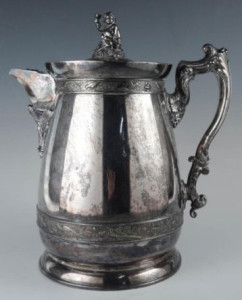 In decorative art, the Bacchanalia will often be seen on such items as wine decanters, pitchers, or snuff boxes. These socially acceptable vices are the perfect backdrop for scenes of partying gods and mortals. The antique silver pill box depicted at the upper left is a charming depiction of a traditional bacchanal scene, with dancing nymphs in a woodland landscape.

The pitcher at the right is a nice example of the subtle use of the Bacchanal theme during the Victorian era. The silver plated pitcher is crafted in the Aesthetic style, with an ornately decorated form. The pitcher features a finial of a small figure of Bacchus, holding a goblet of wine in an eternal toast.

Today, there is a wide variety of decorative and fine art depicting bacchanal scenes, which is quite wonderful for anyone interesting in collecting these festive pieces. We have scene this motif illustrated in jewelry, trinket boxes, pottery and porcelain, and so much more. It’s a delightful sub-category of fine and decorative art inspired by Classical mythology. The pieces illustrated in this post can be found in our store, and we are always coming across new and beautiful Bacchanalia-themed objects.

Depictions of the Bacchanalia
Tagged on: Bacchanalia    Bacchus    mythology    Silver