When it comes to decorating a home, adding antique pieces add a rich, layered sense of beauty (and history!). Now that spring is here, flowers and flower arrangements are definitely on my mind. Florals for spring may be a cliche, but I like to think of them as timeless instead. A beautiful floral-patterned vase can bring the feeling of spring to your home year-round. We have a few fantastic examples of fine quality hand painted floral decorated porcelain from Pickard that I wanted to show off this week.

Pickard China was founded by Wilder Pickard in Wisconsin in 1893, and soon moved in Chicago in 1897. Pickard began by offering hand painted art pieces, tea sets, and dessert sets. Pickard hired both male and female artists (many from the nearby Art Institute of Chicago, and many noted European painters) who created one-of-a-kind pieces. These early pieces of Pickard porcelain were painted on blanks imported from notable European makers. 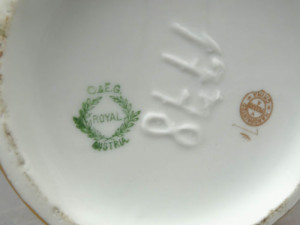 The above vase was decorated by the German-born master painter Paul Gasper, an artist who worked for Pickard in the early 1900s. Gasper is known for his daisy motifs, which is featured on this vase along with vibrant red and pink poinsettias. The vase is accented with the artist’s trademark gilded details and finished with a beautiful ruffled rim with a wide gilded border. Signed for Gasper as pictured.The blank vase was made by the Oscar & Edgar Gutherz (O. & E.G.) Royal Austria Factory.

Pickard China has been called a uniquely American style of hand painted china. One of the most sought after artists working at Pickard was M. Rost LeRoy, who painted for Pickard between 1898 and 1905. LeRoy left Pickard to join the Donath Studio which was founded by another ex-Pickard artist. 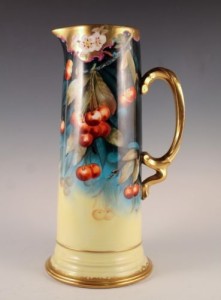 This elegant pitcher at the right is a striking example of LeRoy’s work: the tall form is extensively gilded and features a vivid scene of ripe cherries on the branch. The porcelain blank came from Limoges, France. The pitcher has an unusual Pickard hallmark which is infrequently found.

Because Pickard purchased its blanks from porcelain factories, antique Pickard pieces will usually have two maker’s marks on the bottom: the porcelain factory’s trademark, and Pickard’s trademark that was applied upon decoration. Pickard remained a decorating studio only until the 1930s when they began producing their own line of porcelain blanks to be painted. Antique pieces of Pickard decorated porcelain can be difficult to find in excellent condition in large sizes like this vase and pitcher.

You can find more porcelain in the Nine Caroline Antiques store here.

Or explore all of the categories of fine antiques and collectibles at Nine Caroline Antiques.