With the upcoming end to horse racing season in Saratoga, as proud upstate New Yorkers we have decided to share a few of the paintings in our inventory that are important to the racing culture.

Jenness Cortez (1944- ) is an upstate artist whose paintings depicting the athleticism of Saratoga’s racing horses had made her a famous name in Realist art.

Cortez was born in 1944 in Frankfurt, Indiana. She began her art studies when she was 16, under the guidance of noted Dutch painter Antonius Raemakers. She attended the Art Students League of New York after graduating from the Herron School of Art in Indianapolis, IN.

Following her formal education, Cortez moved to Albany, New York to work as a commercial and editorial illustrator for the biweekly community newspaper “The Washington Park Spirit.” In 1974 Cortez was commissioned to create original paintings of endangered species in the Adirondack Mountains by the New York State Museum. Her paintings from that year are still apart of the Museum’s permanent collection.
Cortez has been commissioned to create commemorative etchings of thoroughbred racing’s Horse of the Year every year since 1981. This prints we have in our inventory are original works from Cortez spanning from the years 1983-1993. 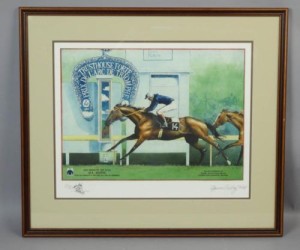 Cortez’s style is described as realist work that has been filtered through “the minds’s eye.”

Throughout the 1980s and her work in Saratoga, Cortez’s fame gained momentum as she was commissioned on more commercial and gallery projects, which solidified her career as a prominent New York capital region artist.
In the mid 1990s, Cortez moved her interest to encompass landscapes and cityscapes, and more recently, still life.

Cortez is currently working on new projects from her studio in Averill Park, NY where her pieces are featured in she and her husband’s gallery.