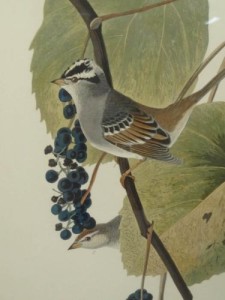 “The Birds of America” is the iconic work of hand-colored, life-size prints by the famed naturalist, ornithologist, and illustrator John James Audubon. The book was first published as a series between 1827 and 1838 with the intent to document every known bird in the United States. Audubon painted over 1000 individual birds, including six now-extinct birds: the Carolina parakeet, passenger pigeon, Labrador duck, great auk, Esquimaux curlew, and pinnated grouse.

Four original prints from the 19th century “double elephant” editions published by Robert Havell & Sons are now available exclusively in our store. These beautiful pieces of Audubon’s “Great Work” are an extraordinary feat of observation and artistry, and would be a remarkable addition to any collection.

The full group can be found at our store. 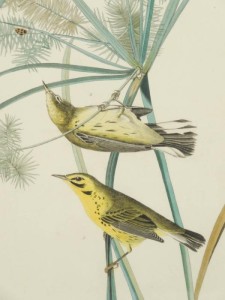 John James Audubon (1785-1851) was born in the French colony of Saint-Domingue (now Haiti) as Jean-Jacques Audubon. His father, Jean Audubon was a sugar plantation owner as well as a French naval officer (and privateer) who helped the American cause during the Revolutionary War. The rising slave unrest in the Caribbean urged Audubon Senior to sell part of his plantation, purchase property in Pennsylvania, and then return to France with his children in 1791. John James Audubon was drawn to birds and nature even as a boy, roaming the fields around his home to draw birds eggs and nests. 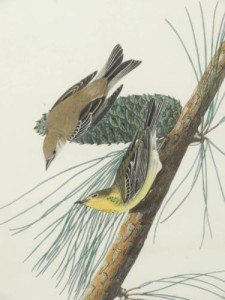 In 1803, John James Audubon immigrated to the United States to avoid conscription to Napoleon’s armies. He took up residence in Pennsylvania, a few miles from Valley Forger, and soon became consumed with naturalistic pursuits. He set about studying American birds, noting the close ties between the environment or nature of a place and the accompanying common traits of its wildlife. Audubon became determined to scientifically record behavior and illustrate all of the known American birds in the most thorough and realistic manner possible.

Audubon painted 435 illustrations of over 1000 individual birds, using primarily watercolors and pastel crayons. Unable to find financial support in America for his “Great Work”, he sailed to the United Kingdom with 250 of his original illustrations. In 1827, he joined with Robert Havell, a London engraver to create “The Birds of America”, also known as the “Havell Edition” or the “Double Elephant Folio”. 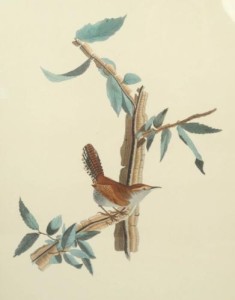 The edition was printed on the largest format paper available for printing in the early 19th century: approximately 26″ x 39″. Audubon insisted on this impressive size in order to accommodate the life-size scale of his drawings. Each plate was engraved from Audubon’s original illustration and then hand-colored. The cost was prohibitively expensive but found support from such notables of the day as King Charles X of France and Queen Adelaide of Britain (wife of King William IV). Many of the original subscribers chose to bind their folios into large four volume sets once the publication was complete (which took over ten years to finish). The  A later edition of “The Birds of America” was published by J. T. Bowen of Philadelphia in a smaller and therefore more affordable format.

Only 120 complete copies of “The Birds of America” from the original Havell Edition are known to survive. Many are held in public institutions, and the New York Historical Society holds all of Audubon’s preparatory watercolors. These beautiful prints are a remarkable piece of history. Take a closer look at the prints available in our store here.