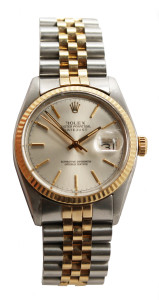 The elegant precision of interlocking gears has inspired watch collecting for centuries. The urge to measure time is one of humanity’s most basic desires. Did you know that the first clock was invented thousands of years ago? Ancient cultures like the Egyptians, Mesopotamians, Chinese, and Greeks used water clocks which used the regular flow of water from one vessel to another to measure time. The invention of candle clocks, the Tibetan and Indian timestick, the hourglass, and the sundial followed. Greek, Chinese, and Middle Eastern inventors began to pair water clocks with gears and weights by the 11th century, but the clock as we know it wasn’t invented until the early 14th century. The invention of the verge escapement is what gave clocks their tick, allowing the movements to become purely mechanical masterpieces of gears and balances, paving the way for the modern watch.

In modern watch collecting, there are two basic categories: mechanical movements or quartz movements. A quartz watch is powered by a battery. A mechanical movement is powered by a wound spring that is released in a regulated manner. Mechanical watches can be either self-winding (or automatic), or manual. A manual watch is wound either with a key or by turning the stem and crown.

The true beauty of watch collecting is that there are many areas a collector can focus on.

Some collectors value the old-fashioned and bulky watches containing a fusee movement. The fusee movement was used in the earliest pocket watches in the 15th century until the early 20th century. A fusee is a cone shaped pulley with a chain wrapped around it, which attaches to the mainpring barrel. Simply put, the conical shape of the fusee compensates for the uneven pull of the chain as the mainspring winds down. The fusee is an elegant and simple solution to a mechanical problem, and some collectors prefer to collect them over more modern movement types.

Other collectors are more interested in the output created by certain brands. Whether focusing on American, English, French, or Swiss, from internationally known brands with decade-long legacies to individual makers whose brand didn’t survive their lifetime, there are a plethora of watchmakers to explore and collect.

Of course,  when speaking of watch collecting, we can’t forget wristwatches. Some of the most high quality timepieces are modern wristwatches from world-renowned luxury watch makers like Patek Philippe, Chopard, Vacheron Constantin, IWC Schaffhausen, Ulysse Nardin, Rolex, and Audemars Piguet.

Whatever your focus, from European to American, from old to modern, watch collecting has something for every collector whether new or experienced. Take a look at the watches and pocket watches available in the Nine Caroline Antiques store.