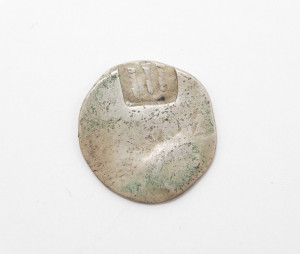 Today we take a look at the fascinating 1652 NE Threepence silvercoin.

In 1652, the first metallic currency was struck in England’s American colonies. During this time period, the American colonies were suffering from a currency shortage. The English government had banned the export of its silver coins to its own colonies. England was experiencing a coin shortage itself and wanted to keep its small coin denominations at home, but the government also believed that the colonies should be sending wealth to England (certainly not the other way around). Even if the English government had wanted to send coins to the colonies, they were unable to do so until they had solved their own currency problems. Of the coins in circulation in the colonies, many were counterfeits. The local businesses struggled to maintain a healthy economy, particularly in bustling port towns like Boston which was already engaging in a healthy import/export trade by the mid 1600s.

The colony of Massachusetts Bay, laboring under the small change coin shortage, resolved to solve the problem on its own. Without bothering to ask approval from the English government, the General Court of Massachusetts Bay charged silversmiths John Hull and Robert Sanderson to create shilling, sixpence, and threepence coins.

The first coins struck in America were made by an illicit mint in Boston, Massachusetts. The coins were struck in silver and are known as the “NE” or “New England” type coins. The coins were struck for only three months in 1652 and are exceedingly rare. The coins were simple, irregularly shaped discs with no decoration or date. One side bore the punched initials of “NE” for New England, while the reverse bore the denomination on the reverse in Roman numerals (III for threepence, VI for sixpence, XII for shilling). 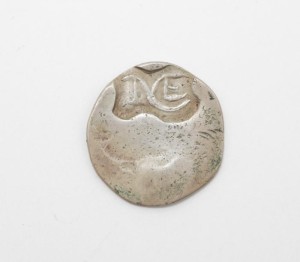 Only one specimen of the 1652 NE Threepence coin is known to exist, and is held in the collections of the Massachusetts Historical Society, though every denomination of the surviving 1652 New England coins is a genuine rarity.

We recently came across an interesting 19th century facsimile coin designed after the extraordinarily rare 1652 New England Threepence. The 1652 NE coins were already known and valued as scarce by this time. In the mid 19th century, the hobby of coin collecting exploded into wild popularity. The surge in interest in coins led to the eternal collector’s dilemma: there are only a very limited number of rare coins, and passionate collectors may never see, let alone own, the most interesting and exciting examples in their field of interest. While counterfeiting coins for use as currency has existed as long as currency has itself, the coin collecting boom now saw an increase in the creation of facsimiles of rare and desirable coins. Some of these facsimiles were honestly sold as interesting copies for the passionate and knowledgeable collector who simply wanted a version of a rarity for his own enjoyment. However, some unscrupulous people would sell the facsimiles as authentic, duping their trusting customers.

The 1652 NE Threepence coin is a fascinating glimpse into the history of the American colonies. Our version of this coin can be found in our store.

Or, click here to visit our store and see everything currently available!