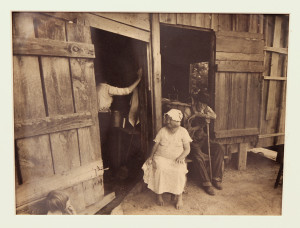 Because we have recently acquired some of her very cool original prints and because it is Friday, we’re making the first ever female war photojournalist, Margaret Bourke-White our first ever Friday focus.

Margaret White was born in New York City in 1904. She was educated at a variety of universities from 1922-1927 including Columbia University, the University of Michigan, Western Reserve University, and Cornell.
During that time she picked up photography as a hobby. By the time she left Cornell University in 1927, she was returning to New York city to pursue freelance opportunities.

Also during this time she picked up her mother’s maiden name (Bourke) to create the professional hyphenated name we recognize today.

After a brief stint as an architectural photographer and becoming one of the pioneers of industrial photographers,  Bourke-White began working for Fortune Magazine in 1929.

In 1930, while she was on assignment in Europe to photograph the Krupp Iron works in Germany, Bourke-White became the first foreign photographer to have complete access to the Soviet Union when she independently documented the progress of Joseph Stalin’s First Five Year Plan.

While this achievement led to her being named one of the 20 most notable women in 1935, Bourke-White became so distraught by the lives of the Soviet people that she vowed that she “would undertake only those photographic assignments which I felt could be done in a creative and constructive way.”

Bourke-White became one of the first four staff photographers for the fledgling Life magazine when it began its circulation in 1936. Throughout the 1930s she traveled for Life, taking photos of the areas affected the most by the Great Depression and the Dust Bowl. Both of the pictures in our small collection of Bourke-White’s photos are from this part of her career.

In 1941 Bourke-White went back to the Soviet Union with hundreds of pounds of camera equipment to be the first photographer in Moscow during the German raid on the Kremlin. She was also hired to fly with and photograph American WWII B-17 bombers during an actual air raid. One of the pictures from the shoot included Bourke-White dressed in her flying gear, and it inexplicably became one of the most popular American Army pinup posters of the war.
Bourke-White is also famous for taking portrait photos influential figures like Winston Churchill, Gandhi, Franklin D Roosevelt, Pope Pius XII.

Her final assignment was to cover the Korean War. During this time she began to have symptoms of Parkinson’s disease, and by the mid 1950s she could no longer continue to work. She retired and published her autobiography Portrait of Myself in 1963 as well as several other books. She retired from Life Magazine in 1969 and passed away in Stamford, Connecticut in 1971.

The two original prints we have from Bourke-White’s early career are special to us because they represent a grim period in American history presented by a talented photographer in a way that makes them seem creative and even hopeful. She photographed not just major events like wars and ecological disasters, but the way these events affected the lives of the people living through them.

You can check out our original prints from Margaret Bourke-White in our Ebay store here.